The James Catalogue of Western Manuscripts

All Manuscripts Print this page

It begins with a Preface addressed to Paul II. Then follows a list of contents.This volume contains Pars II. Tractatus III.-IV. and Pars III. Tract. I.-XIV, followed by an Appendix of Epistles, of which the last is the spurious letter of Cyril to Augustine on the miracles of St Jerome.
The Text begins on f.9.
This page has a very fine border without background, framed in plain gold. It consists of conventional flowers and has a few figures of men interspersed.
The initial has a picture on dead gold ground, of St Jerome as cardinal seated in a high-backed chair, lion at his feet, book on desk before him. A black monk kneels on R. with scroll: Sancte Jeronime ora pro me.
The general effect of this work, which is done in a dry Dutch style, is extremely good.
On the last page is the colophon in black capitals:
EUSEBII · HIERONIMI · DOCTORIS · EXIMII · SECVNDVM · EPISTOLARUM · EXPLICIT · VOLVMEN · ANNO DOMINI · 1478.
T. WERKEN.
The smaller initials throughout are very good. They are especially numerous and conspicuous in the tract De Viris Illustribus, ff.270-280.

Morgan, N., and S. Panayotova, et al., ed., Illuminated Manuscripts in Cambridge : A Catalogue of Western Book Illumination in the Fitzwilliam Museum and the the Cambridge Colleges. Part One, The Low Countries, Germany, Bohemia, Austria, Hungary, 2 vols., (London, 2009), vol. 1, no. 38 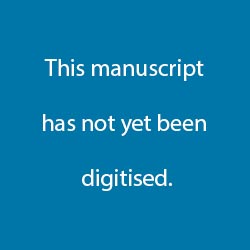